Meditation Better At Handling Stress Than Other Relaxation Methods

We probably all know that relaxation methods help to heal the body from the effects of stress. But, researchers at 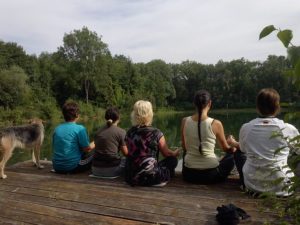 Carnegie Mellon University in Pittsburgh, Pennsylvania (USA), have found that meditation‬ produces new connections in certain parts of the brain which could boost resistance to stress even further than regular relaxation methods.

According to the study the brain changes seen in meditators were not seen in the patients who followed other relaxation methods.

You can read more about this study & it’s findings in the article below. ~ Anthony Profeta

What’s really going on in our brains when we meditate? Among growing scientific research backing up its beneficial effects on health — such as improving anxiety, depression and inflammatory conditions — American researchers have found that meditation produces new connections in certain parts of the brain which could boost resistance to stress.

A team of researchers at Carnegie Mellon University in Pittsburgh, Pennsylvania (USA), studied the changes that occurred in the brains of 35 job-seeking adults suffering from stress when they followed mindfulness meditation sessions.

The study assigned some of the participants to an intensive three-day mindfulness meditation program, while another group followed relaxation sessions involving no meditation. The 35 participants were given a five-minute resting state brain scan before and after the three-day programs. Blood samples were also taken before the start of the three-day sessions and at four months after.

The scans showed that the meditators’ brains strongly increased functional connections in the resting default mode network, particularly in areas regulating attention and executive control — i.e., in parts of the brain that can affect our behavior. These changes were not seen in the adults following relaxation sessions.

The results, published in the journal Biological Psychiatry, once again support the idea that mindfulness meditation influences the brain’s ability to create, remove or reorganize networks of neurons and the connections between them.

Another positive result for meditating patients was a reduction in the level of Interleukin-6 (IL-6), a biological marker for inflammatory health. The scientists consider that the changes in the brain linked to mindfulness meditation lead to the production of a biological marker that improves the brain’s ability to manage stress and its consequences, such as inflammation.

These brain changes were not seen in the patients who followed the relaxation sessions.