Meditation Combined With Exercise Can Decrease Depression By 40%

Depression affects millions of people around the world. And there’s already a mountain of evidence which shows a 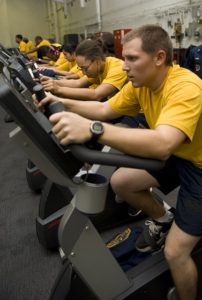 link between exercise and feeling happier. But recent research suggests that aerobic exercise can be used as a much more powerful weapon against depression when combined with one thing — meditation!

In fact, a new study published in the journal of Translational Psychiatry found that the mix of meditation and exercise can seriously reduce symptoms of depression—and this combo can do it fast.

How fast you ask?

The study conducted at Rutgers University found that a meditation and aerobic exercise combination – done just twice a week for only two months – reduced the symptoms of depression for a group of students by 40 percent.

This is amazing news for those suffering from depression.

You can read more about this study in the article below which was originally published in the Ruter’s Today University News.

Meditation and aerobic exercise done together helps reduce depression, according to a new Rutgers study.

A combined program of meditation and exercise can reduce depression, according to a Rutgers study

The study, published in Translational Psychiatry this month, found that the mind and body combination – done twice a week for only two months – reduced the symptoms for a group of students by 40 percent.

“We are excited by the findings because we saw such a meaningful improvement in both clinically depressed and non-depressed students,” says Brandon Alderman, lead author of the research study. “It is the first time that both of these two behavioral therapies have been looked at together for dealing with depression.”

Alderman, assistant professor in the Department of Exercise Science and Sports Studies, and Tracey Shors, professor in the Department of Psychology and Center for Collaborative Neuroscience, both in the School of Arts and Sciences, discovered that a combination of mental and physical training (MAP) enabled students with major depressive disorder not to let problems or negative thoughts overwhelm them.

“Scientists have known for a while that both of these activities alone can help with depression,” says Shors. “But this study suggests that when done together, there is a striking improvement in depressive symptoms along with increases in synchronized brain activity.”

The men and women in the Rutgers study who completed the eight-week program – 22 suffering with depression and 30 mentally healthy students  –  reported fewer depressive symptoms and said they did not spend as much time worrying about negative situations taking place in their lives as they did before the study began.

This group also provided MAP training to young mothers who had been homeless but were living at a residential treatment facility when they began the study. The women involved in the research exhibited severe depressive symptoms and elevated anxiety levels at the beginning. But at the end of the eight weeks, they too, reported that their depression and anxiety had eased, they felt more motivated, and they were able to focus more positively on their lives.

Depression – a debilitating disorder that affects nearly one in five Americans sometime in their life – often occurs in adolescence or young adulthood. Until recently, Rutgers scientists say, the most common treatment for depression has been psychotropic medications that influence brain chemicals and regulate emotions and thought patterns along with talk therapy that can work but takes considerable time and commitment on the part of the patient.

Rutgers researchers say those who participated in the study began with 30 minutes of focused attention meditation followed by 30 minutes of aerobic exercise. They were told that if their thoughts drifted to the past or the future they should refocus on their breathing – enabling those with depression to accept moment-to-moment changes in attention.

Shors, who studies the production of new brain cells in the hippocampus – the portion of the brain known to be necessary for some types of new learning – says even though neurogenesis cannot be monitored in humans, scientists have shown in animal models that aerobic exercise increases the number of new neurons and effortful learning keeps a significant number of those cells alive.

The idea for the human intervention came from her laboratory studies, she says, with the main goal of helping individuals acquire new skills so that they can learn to recover from stressful life events.  By learning to focus their attention and exercise, people who are fighting depression can acquire new cognitive skills that can help them process information and reduce the overwhelming recollection of memories from the past, Shors says.

“We know these therapies can be practiced over a lifetime and that they will be effective in improving mental and cognitive health,” says Alderman. “The good news is that this intervention can be practiced by anyone at any time and at no cost.”